DESCRIPTION: Ibupara contains Ibuprofen and paracetamol which act as anti-inflammatory and Analgesic.

MECHANISM OF ACTION:
Ibupara acts by reducing production of prostaglandins, which are are involved in the pain and fever processes, by inhibiting the cyclooxygenase (COX) enzymes.

IBUPARA is rapidly and completely absorbed from the gastrointestinal tract after oral administration with peak plasma levels occurring 30 to 60 minutes after administration. The apparent volume of distribution is 1 to 1.2 L/kg. It is metabolised in the liver and excreted in the urine mainly as the glucuronide and sulphate conjugates. Less than 5% is excreted as unchanged paracetamol. The elimination half-life varies from about 1 to 4 hours.

DOSAGE AND ADMINISTRATION:
As directed by the Physician.

SIDE EFFECT: Adverse effects of Paracetamol are rare but hypersensitivity including skin rash may occur.

Ibuprofen when used with Aspirin gets displaced from its site, When used with lithium and Methotrate, It increases their toxicity. Ibuprofen antagonises the effect of diurectics like Frusemide and Thiazide duiretics. 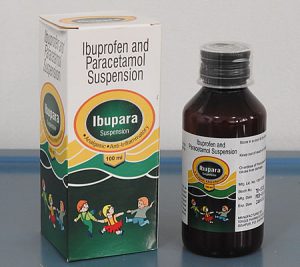